'So undeniably distinctive, creative and experimental, their music reaches far beyond the scope of multi-genre, it is multi-dimensional.' MOJO JUNCTION

The Imprints live show has been a highlight at festivals across the globe, with elements of electronic dance music complemented by the excitement of fiery improvisation that bounces between them on stage.

The Imprints are a live dance music duo consisting of Willow Stahlut and Linden Lester. With the pulsating feel of electronic music and the raw live energy of violin and drum kit, The Imprints are known for their slow building, psychedelic tunes that are equally at home in front of a folk festival audience as they are on an electronic festival stage.

Inspired musically by their travels around the world The Imprints draw inspiration from the traditional music of Africa, India and Eastern Europe as well as reggae, dub and various electronic music styles.

The Imprints have been honoured to share the stage with great friends and fellow musicians including Greg Sheehan, Mal Webb and Parvyn and Josh (Bombay Royale). Individually, Willow and Linden have worked with many highly regarded artists including The Cinematic Orchestra, Opiuo, Goldfrapp, Adalita (Magic Dirt), Blue King Brown, Little Birdy, Ainslie Wills, Yasmin Levy and The Bombay Royale.

The Imprints have released four albums and an EP. Their latest album Midnight Sun was largely inspired by their time in Greenland where they played an outdoor festival in the capital city Nuuk, before sailing through isolated fjords amongst icebergs and towering mountains with the sun never setting. 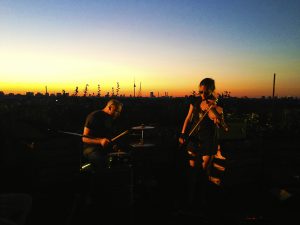